In this article I will briefly summarize lipid fasting metrics and then expand in more detail on their postprandial measurement. In the followup, Lipid Series Part II, I will introduce the utility of postprandial triglyceride measurements.

To better understand Lipid, and more specifically, Triglyceride metabolism, it is difficult to recommend a single review. There is of course the 4th edition of the fantastic book by Prof. Keith N. Frayn (of Oxford University) 1, but that is not a short and simple update if that is what you need one. Perhaps a good enough introduction would be the book chapter “Introduction to Lipids and Lipoproteins” by Feingold and Grunfeld in the free Endotext 2. If you are already there, another chapter provides further insight into triglyceride metabolism and the risks associated with elevation in both fasting and postprandial triglyceride levels: “Risk of Fasting and Non-Fasting Hypertriglyceridemia in Coronary Vascular Disease and Pancreatitis” 3.

In general, the level of fasting triglycerides correlates well with the corresponding insulin level, and with Insulin Resistance (IR). This is also why the TriglYceride-Glucose index (TyG) is a good proxy for IR, especially when triglycerides are combined with fasting glucose. As such it provides a cheap and convenient metric like HOMA-IR. However, the TyG index has the very same issues that other fasting indices do in that it is unable to detect the majority of early metabolic derangements. To detect these, one needs instead a postprandial or meal tolerance test. Reduced fatty acid uptake is an early indicator of IR and this may be detected through measuring elevated and/or the sustained elevation of triglyceride level in the postprandial phase.

Take the next leap in quantified metabolic Science. Recruitment now open at https://meterbolic.org/- please log in and then press on the long black button, "Please show me additional options ..." .

We have limited places to join our new cohort to not just read the new science, but to become it! Quantify Insulin Resistance and your metabolic status with fast and easy to use precision lipid meters. Manage your risk of developing metabolic disease or of suffering a severe viral infection this winter. .

If you choose to donate at least $350 to the project. LipidOne will set up send to you, your very own LipidOne Pack, comprising:

If you wish to make a tax-deductible donation, then please mail ed@difference.foundation. For any other questions, please send email to LipidOne@meterbolic.org

So why is reduced lipid uptake by adipose tissue an early indicator of IR?

One of the major metabolically active organs is White Adipose Tissue (WAT). The hallmark of metabolic disease is In fact, ectopic lipid accumulation (i.e. the collection of lipid in places where it normally hardly appears) and it typically results from WAT dysfunction. In fact, this defect may be the single direct driver of all other manifestations of IR as we know it.

In other words, when lipids cannot be safely stored in WAT to the extent that it is required by the demands of diet, energy needs and metabolic status, fatty acids then overflow to other sites & organs 4. These could theoretically also store more lipids in a safe way, but the aforementioned flood of fatty acids does not arrive alone, but is accompanied by inflammatory signalling molecules, hormones (e.g. higher leptin and visfatin, and lower adiponectin), and higher levels of cytokines (e.g. elevated portal IL-6), originating from the stressed-out main storage organ, the liver 5. What is more, pre-adipocytes have been shown to leave WAT and find a new home as mature fat cells in ectopic organs, such as in skeletal muscle 6. The net effects of these factors represent the most likely causal problem for the aforementioned ectopic deposition of lipids and the initiation of local inflammation and IR 7. 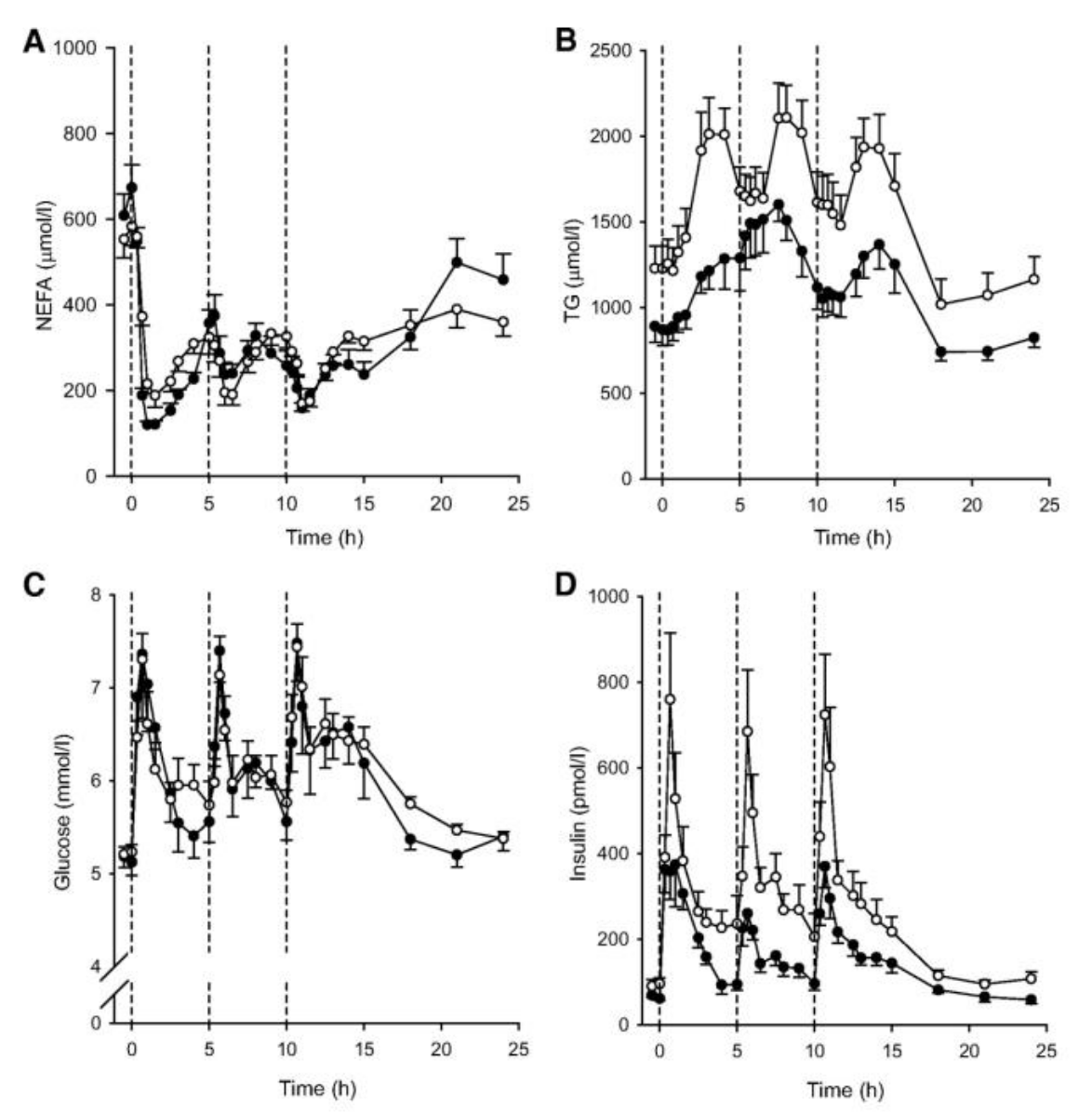 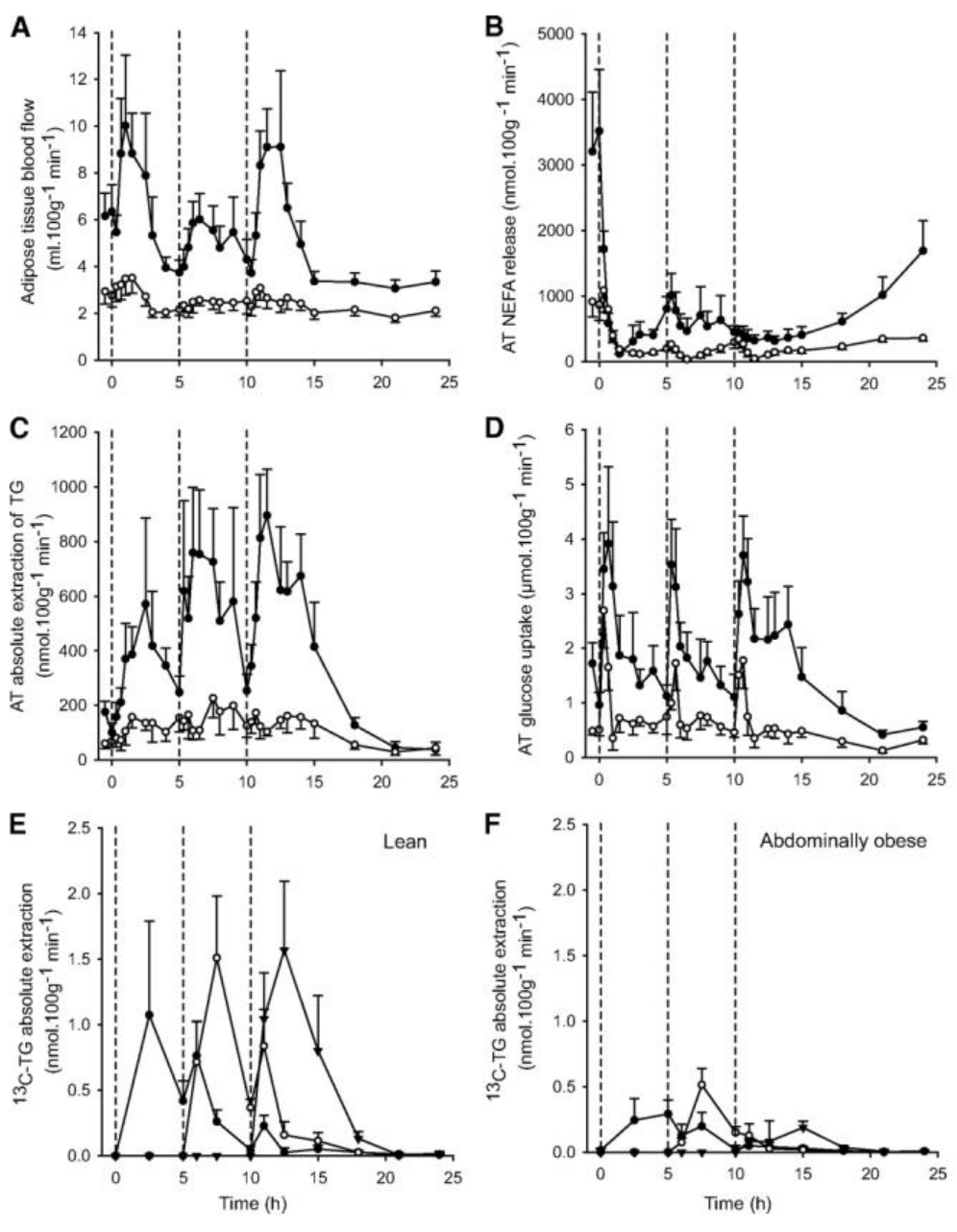 There are two main transport forms of fatty acids in the blood. 1) Free fatty Acids (FFA) travel after liberation within adipose tissues through the blood (bound to albumin as a carrier) towards organs that use the FFA as a fuel and 2) Triglycerides (TGs) which are made by the liver through esterification, i.e. the bonding of the FFA to a glycerol molecule. This insoluble TG is then repackaged into soluble lipoprotein, mainly VLDL and also into Chylomicrons, both of which are then released into the circulation.

Below graphs are taken from reference 4 and nicely depict lipid and glucose dynamics after three mixed meals over a day.

Although triglycerides are often considered a transport form, these glycerol-bound fatty acids are dynamically broken down in adipose tissues and carried by the blood for uptake and storage elsewhere. TG is also broken down in other tissues and organs, for instance the heart and skeletal muscles and used for energy supply. In fact, there is a constant cycling between metabolically active organs, i.e. the liver, adipose tissues, and the small intestine, ensuring proper availability by increasing or decreasing the rate of cycling. This cycling also plays important signaling roles via different fatty acid profiles and derivatives (sphingolipids) that characterize release at various tissues 8 .


Even though knowing its dynamics may be meaningful, the measurement of FFA is technically difficult even in most clinical laboratories. Instead of FFA, we routinely measure TG in the fasting state and as mentioned it may also be measured and interpreted in the postprandial phase. The utility of determining postprandial TG levels is to learn about its dynamics. Lipid metabolism is a bit trickier than that of glucose, in that fatty acids do not simply pass through the intestinal wall as glucose does. While glucose take-up by intestinal epithelial cells (enterocytes and enteroendocrine cells) results in a closely corresponding increase in blood, FFA (and monoacyl-glycerol), are taken up from the intestinal lumen, and are first converted back to TG which may then first be stored in the form of lipid droplets within enterocytes and actually only released later.

In line with this, the first wave of chylomicrons (lipoproteins secreted by enterocytes containing ApoB-48 proteins) often contain lipids from the previous meal, not from the just- ingested one. This makes levels and dynamics a bit less well correlated to the meal under examination, but not to the extent that values could become of no or little use. In fact, postprandial lipid dynamics is closely related to changes in glucose, but the latter can be masked by a non-stressing mixed meal.

Technically, the microdialysis study by McQuaid et al. 4, which is still one of my absolute favorites (and from which above series of graphs are borrowed) showed that in visceral obesity (or IR) there are three parameters that correlate very closely in adipose tissues following a mixed meal:

Note the order, as it is likely very important. The conclusion we may draw based on this is that WAT insulin resistance, which may manifest mainly as decreased blood flow, results in a reduced (impaired?) uptake of glucose via the GLUT4 pathway. This pathway is directly linked to fatty acid re-esterification (the synthesis and storage of TG described above). The reduced availability of glucose means that glycerol may no longer be synthesised via the simpler glycolytic pathway and furthermore, glycerol cannot be recycled in WAT due to lack of a key enzyme.

In these circumstances (of reduced availability of intracellular glucose) the esterification of circulating FFA to TG has to occur instead in the liver. This means that glycerol either has to be synthesized via glyceroneogenesis, a process that shares several enzymes with the gluconeogenic pathway, reviewed in 9 or by recycling glycerol with glycerol kinase.

This hepatic synthesised TG is then packaed into lipiprotein and is released into circulation. Here it is detected as TG in blood tests.

The ultimate problem is that if there is a disturbance in glucose uptake into WAT, then it is automatically linked to reduced glycerol synthesis and eventually to impaired lipid storage. Lower storage means a higher overflow in the blood and in other tissues, triggering inflammatory processes, and finally, ectopic deposition. Proper glucose uptake is more important in adipose tissues, as shown by specific Gene Knockout (KO) models, than in skeletal muscle, despite the one order of magnitude lower level of absolute uptake 10. This is an ultimate signaling hub, and as such, quality trumps quantity. Insulin must follow the increased need for suppressing lipolysis to avoid direct and immediate lipotoxicity, but higher insulin has minimal effect on re-esterification of FFA to TG as discussed in this reference 11 and please see Fig.4. from that paper reproduced below. 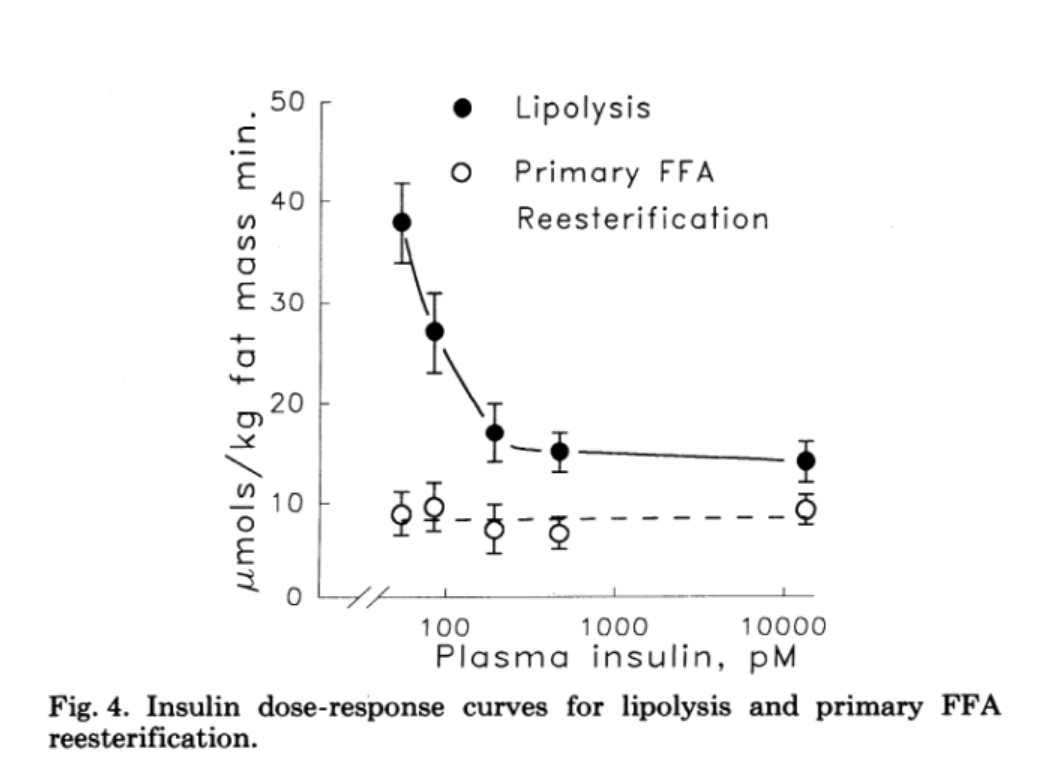 Since, unlike the reserve that muscles provide in the case of glucose, there is no backup plan for massive amounts of dietary fats. In summary, the above highlights the importance and the utility of monitoring the efficiency of lipid uptake by adipose tissue after a meal. And that’s exactly where TG come into the picture. The expectation therefore is that in insulin resistant individuals, TG reach higher peaks and linger around longer than is the case in insulin sensitive people. This follows from the reduction in uptake to WAT as discussed above. 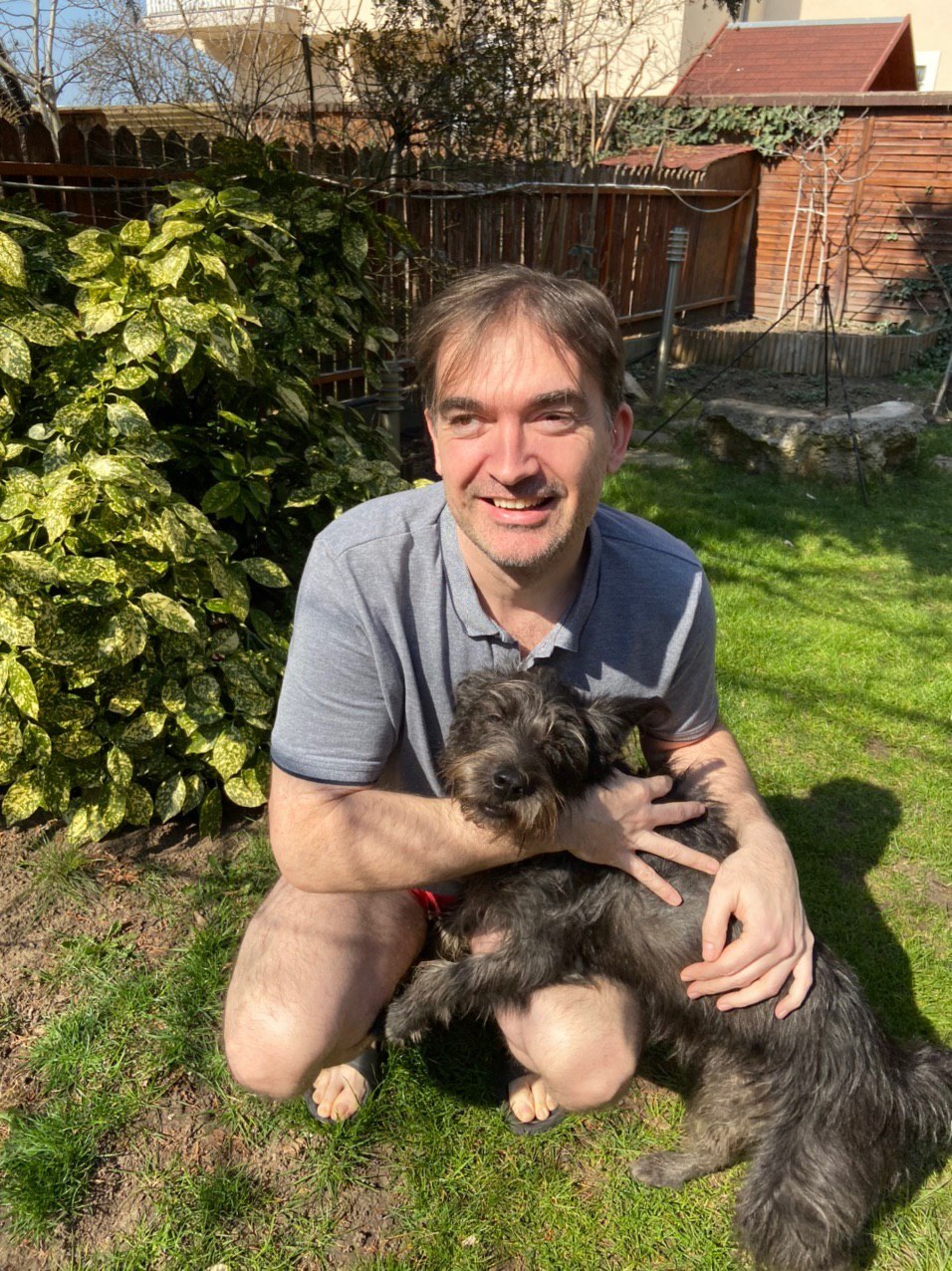