"In retrospect, I feel like I have always had some degree of metabolic dysfunction"

In 2012, aged 38, for my engineering job I went for a work medical and found I had very high fasting blood glucose (10.7 mmol/L) and was told I should be treated as if I were T1 diabetic (not an definitive 'diagnosis' I noted at the time). Prior to this, for a year or more(?), I had been experiencing worsening classic symptoms of uncontrolled diabetes (thirst, excess urine, fatigue). Interestingly, I had a high fasting glucose measurement in 2008 (8.9 mmol/L), which could have been in error, follow-up tests were lower, but they were elevated (5.2, 5.8; normal would be around 4.5mmol/L). In retrospect, I feel like I have always had some degree of metabolic dysfunction. If only I had access to the kind of insulin testing that Meterbolic provide back in 2008, perhaps I could have intervened early and prevented half a lifetime's reliance on constant blood glucose monitoring and 4 or 5 insulin injections per day.

Insulin therapy immediately lowered my blood glucose (HbA1c 9.8% down to 5.3%) and removed all of the symptoms I was suffering. But following 'standard care' (eat what you like and cover it with insulin), the carb content in my diet increased, my blood glucose and insulin use also gradually increased (HbA1c rose to 6.3%, and insulin use rose from around 20U to 38U/day).

In 2019 I found out about insulin resistance, and the benefits to diabetics of carbohydrate restriction / ketogenic metabolism. I decided I did not want double diabetes (T1 plus T2), and all the complications that result from insulin resistance. That situation can be described as iatrogenic illness (i.e. encouraged by medical intervention). It is easy to see why excess insulin in T1 diabetes would be worse than in a non-T1 person: insulin concentration in peripheral tissues are 2 to 3 times higher for the same level of blood sugar control because the insulin is not secreted in the pancreas where it holds glucagon secretion in check (and hence production of glucose by the liver). This was confirmed with an insulin test in the fed state 4 hours after a rapid-acting insulin injection, where serum insulin concentration was more than 3x normal: 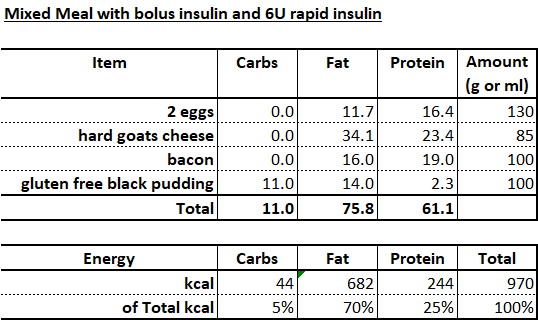 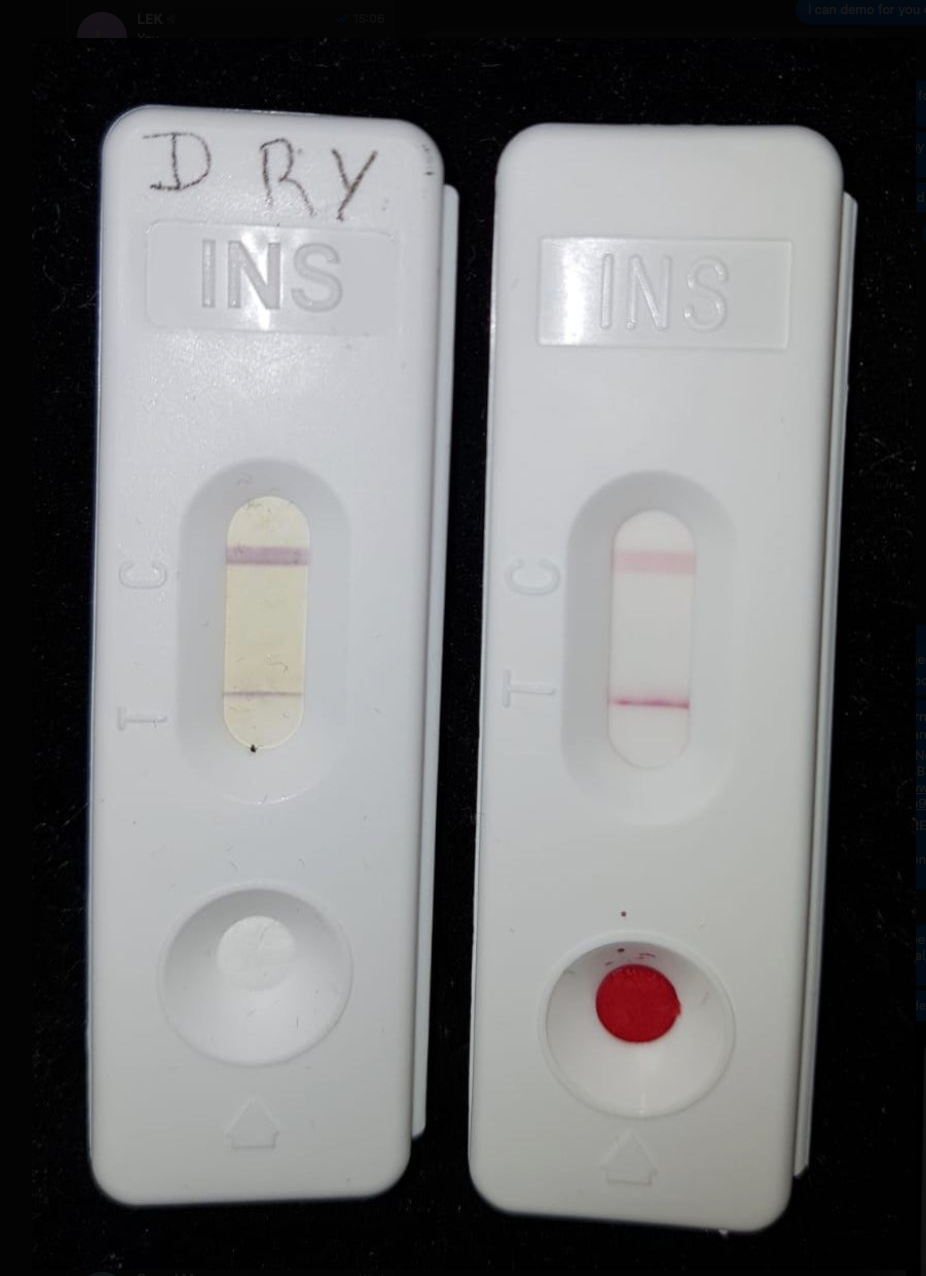 This test on the right in the photo above is a four hour post-prandial insulin test on 6 December 2020, the meter measured 100µIU/ml A normal value would be <30µIU/ml

In 2019 I had switched to a ketogenic, real food, diet with regular intermittent fasting and occasional extended fasting, and then excluded all wheat/gluten/cow's milk products as I began to focus on my gut health and intestinal permeability issues. Throat inflammation, eczema, flatulence and body odours all disappeared. HbA1c dropped to 5.0% but has since drifted up slightly to 5.3%. I am motivated to drop down to 4.6% (non-diabetic). Note, Dr Richard K Bernstein (author of Diabetes Solution) reports normal is between 4.2 & 4.6%, and for every 1% increase above 4.9% there is a 28% increase in mortality. Another study showed that a reduction in HbA1c from 5.4 to 4.5% reduces my risk of retinopathy and kidney disease by half and reduces chances of neuropathy by 20%. So there is a lot to play for with this target incremental improvement!

But how to do this? I have noticed that my blood glucose control is transitory, and for extended periods runs high (almost regardless of how much insulin I inject). Why? Does my endogenous insulin secretion rise and fall, as I expect insulin resistance does, and what drives this? I suspect dietary inputs drive intestinal permeability and then inflammation, and that could affect both secretion and utilisation of insulin in T1DM, and/or drive excessive unchecked glucagon production via stress signalling pathways. I am using Meterbolic equipment to measure insulin, c-peptide, hs-CRP (and hopefully one day glucagon) to develop a fuller picture of whether my insulin secretion varies, whether it can be improved, and whether I can tie my blood glucose control to specific dietary inputs that cause inflammation.

Perhaps it could be possible to demonstrate at least a partial reversal of T1DM over the long-term. I subscribe to the belief that in T1DM the rate of beta cell destruction is greater than the rate of production and this can explain why patients with T1DM over many decades still have a remaining measurable and functional beta cell mass.

Under normal circumstances, for a low-carb 'fat adapted' person, the key to getting a sensible result from a Kraft test is to “wake the pancreas up a bit", so for a few days or even a couple of weeks before the test, the subject should eat a high carb diet. This has the effect of re-sensitising the body to glucose and insulin. In T1DM this would be undesirable due to the difficulty maintaining normo-glycemia with the ingestion of high amounts of carbohydrate: timing and quantity of exogenous insulin is extremely difficult or impossible to manage, leading to the over- or under-injection of insulin and ensuing glycaemic roller-coaster that is extremely damaging to the body. Following is a testing protocol that was followed to measure endogenous insulin secretion in the absence of any lingering exogenous insulin that could still be active in the body:

The results of this first test were both interesting and encouraging. I am still making appreciable quantities of insulin! Whilst a peak of 5.5µIU/ml is not huge, it signals that there is something to play for here, that I still have some remaining functional pancreatic beta-cell mass. C-Peptide was very low or unmeasurable throughout. Peak blood glucose was 17.3 mmol/L, rising from a pre-OGTT level of 7.8 mmol/L. Endogenous insulin secretion controlled blood glucose down to 14.7 mmol/L before insulin was injected with a mixed meal. The bolus was calculated at 5U required to correct for the pre-meal high BG and bring me down to 4.5 mmol/L (based on double my normal insulin sensitivity - where in this more sensitive state 1U would lower BG by 2 mmol/L), plus an extra 5U to correct for the mixed meal: 17g CHO + 84g PRO = 68g carb equivalent (based on double my normal carb:insulin ratio - where in this more sensitive state 1U would cover 20g carbohydrate equivalent). In retrospect, I should have used 8 or 9U rapid insulin as I did appear to have over-injected slightly. However, glucagon again appears to have saved me from going too low, and I did not suffer any effects of hypo-glycemia. In my experience of extended fasting I can run generally run a blood glucose around 3.0 mmol/L without any ill effects since ketones are very high in this state and are providing the brain with plentiful fuel supply: this was observed in 2 T1 diabetics and 6 non-diabetics during the zerofive100.com event.

The image below shows Jon Furniss undergoing metabolic testing in September 2020 during the zerofive100.com project, where we explored ketogenic metabolism in the T1 diabetic state. 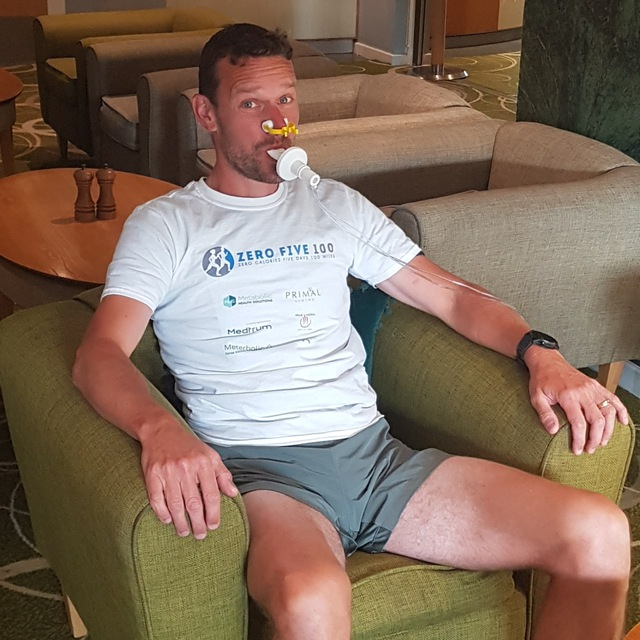